In four stations and as many corporeal states—fluidity, control, meditation, and obsession—, Louise Lecavalier continues her vertiginous exploration of dance. 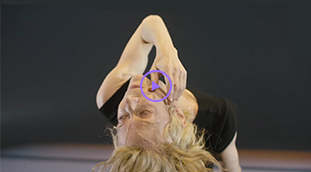 Choreographed and performed by:
Louise Lecavalier

Two characters fighting nonsensical battles are matched in a strange dance of confrontation, avoidance, and surrender. Their quirky search for the meaning of life is loosely based on the characters in Italo Calvino’s novella, The Non-Existent Knight. 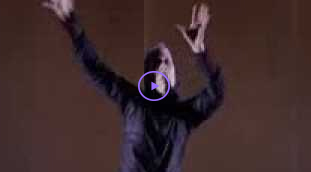 Louise Lecavalier and her partner, Frédéric Tavernini, risk all in this intense, rough, obsessive, and mysterious work set to Mercan Dede’s rhythmical, visceral music. As quick as thought, the body dictates its laws and transgresses its limits. “I wanted the body to say everything it wants to say without censuring it, leaving it free to surprise itself by what it reveals, to allow something true and beyond our control to emerge from the profusion of spontaneous movements, divulging something of the meanderings, tumult, excesses, and contradictions that we’re made of: the unbearable lightness of being, and of the soul. ” — Louise Lecavalier 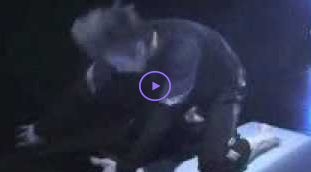 More than ten years after leaving La La La Human Steps, Louise Lecavalier is revisiting, alongside dancer Keir Knight, three duets from her final years with the celebrated troupe (excerpts from 2 and Exaucé/Salt). 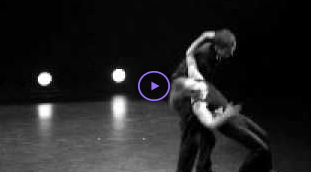 Children are beautiful, ugly, sweet, annoying, hateful, loving, mad, bad, loud and funny – so is Children, a bitter sweet and sweaty duet which exposes the heaven and hell of a relationship at breaking point. The fine and divine line between love and hate, passion and violence is revealed as two people are plunged into the agony and the ecstasy of trying to stay together for themselves and for their children.

Children is dark, witty, very physical and like a great big grown-up child. 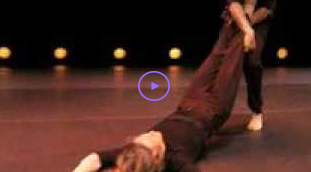 “The work is decidedly brief and low-tech in contrast to the large-scale big-budget features that influence it. The conventions of epic cinema serve as an unconventional backdrop for a small story that is personal, intimate and true. Lone Epic looks for the possibility of real human emotion within the facade of presentation, while recognizing that the emotions of love and loss, while intensely personal, are of epic importance. Lone Epic is both humble and grand, real and artificial. A spectacle made of the real-life drama of desire.” — Crystal Pite 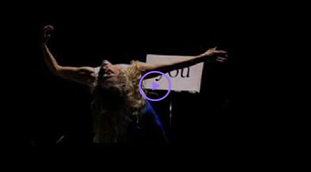 “In Benoît Lachambre’s solo “I” Is Memory, the mind no longer directs the body’s movements: movement springs from an inner explosion that radiates throughout the body – in its bones, muscles, organs, and articulations. Disjointed and undulating, the body becomes thought. “I” Is Memory evokes abandonment, the collapse of the mind, the loss of identity when a being is stripped of its habitual references. This quasi meditative dance, performed with extreme slowness in a drastically minimalist mode, is the dance of a creature of the shadows, a being in the process of metamorphosis, a mutant.” — Louise Lecavalier 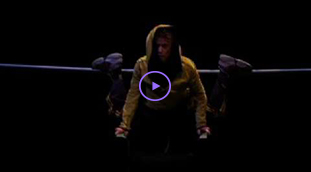 A solo work co-created by Benoît Lachambre and Louise Lecavalier

Alternately close or distant, the two performers of Lula and the Sailor are hardly ever physically together and they rarely look at one another. They reveal themselves by the way they move and communicate in duet. “Lula and the Sailor considers the dynamics of a straight line, the clearcut relationship between in and out, and the grey areas of hello and goodbye. A portrait of abundance in an austere frame. A meditation on the activity of simplicity.” ―Tedd Robinson 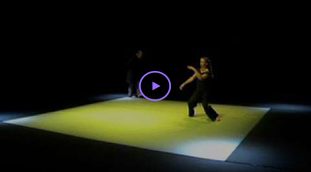 After the solo “I” Is Memory, created by Benoît Lachambre for Louise Lecavalier in 2006, Benoît and Louise finally meet in Is You Me, a piece that crystallizes their desire to dance together, a duet on the theme of identity, fusion, and distance, created in collaboration with visual artist Laurent Goldring, and with live musical accompaniment by composer-performer Hahn Rowe.

Robert Abubo is a graduate of the Royal Winnipeg Ballet School. He worked with Le Groupe Dance Lab in Ottawa from 1994 to 2006 under artistic director Peter Boneham, and with Dancemakers from 2008 to 2015. As an independent dancer, he has worked with Tedd Robinson, Sylvain Émard, Lynda Gaudreau, Shannon Conney, Bill James, Luc Dunberry, Winnipeg’s Contemporary Dancers, Heidi Strauss, Kate Hilliard, Ame Henderson, Dana Gingras, and Ben Kamino. His choreographies have been presented at the Canada Dance Festival, Tangente, Dancer’s Studio West, Kaeja d’Dance, Dancemakers, and Nuit Blanche Toronto. Robert was Louise Lecavalier’s partner in the duet Lula and the Sailor and the quartet Cobalt rouge, both choreographed by Tedd Robinson.

Classically trained, France Bruyère quickly widened her field of interest to include contemporary and jazz dance. After her professional debut at seventeen with Groupe Nouvelle Aire in Montreal, she danced for numerous choreographers and with several dance companies which, besides Nouvelle Aire, included Groupe Axis, the Louise Latreille dance troupe, Pointépiénu, and the Danny Grossman Dance Company in Toronto. After a decade as a rehearsal director for La La La Human Steps, she taught at UQAM until 2017 and works for Louise Lecavalier as artistic assistant and rehearsal director.

Born in Vientiane, Laos, Montreal-based Siphay Southidara, better known as Yso, holds a diploma in fashion design from the Collège Marie-Victorin in Montreal. Passionate about fashion design, artistic direction, and all forms of contemporary creation, he applies his many talents to each of these domains.. A long-time collaborator with fashion designer Denis Gagnon, he has worked as artistic director on several of his shows. All sectors of the artistic community, including contemporary dance, theatre, music, film and visual arts, have called upon his creative talents: Guy Maddin, Brigitte Haentjens (Sibyllines), Louise Lecavalier, 45 Degrees (Cirque du Soleil), Moment Factory, Julie Charland, Lhasa de Sela, Patrick Watson, Tedd Robinson, Sylvain Émard, BJM Danse, the Biennale de Montréal, etc. In 2010, Yso joined the Folio Montreal Agency as a stylist.

Mercan Dede believes that when you put digital, electronic sounds together with hand-made, human ones, you can create universal language, capable of uniting old and young, ancient and modern, East and West. It’s a bold claim, but the Turkish-born and Montreal-based musician/producer/DJ has the career and the music to back it up with over 800 concerts worldwide in his fifteen-year musical career. Mercan Dede’s albums, Su[Water] (2004), Breath (2006) and 800 (2007), all topped the European World Music Chart. His album 800, dedicated to the 800th birthday of the great Sufi philosopher Mevlana, was selected as the “World’s Best World Music Album of 2008” by WOMEX. In 2013, he released a new double album, Dünya / Earth.

DANCER, A FEW MINUTES OF LOCK

Born in Calgary, Keir Knight trained in several dance schools in Canada and in the United States. His first professional role was with the Royal Winnipeg Ballet. He met Montreal choreographer Édouard Lock, who took him to Paris to tour in Salt for several weeks. He also danced with La La La Human Steps in Amelia and Amjad. For Keir, this opportunity to partner Louise Lecavalier in A Few Minutes of Lock completes a personal cycle of respect for Édouard Lock’s work.

Dancer, Children and A Few Minutes of Lock

Patrick Lamothe graduated from LADMMI in Montreal in 1995. He danced with Ginette Laurin’s company, O Vertigo, from 2000 to 2007. As an independent dancer, Patrick worked with Robert Lepage and with choreographers Jean-Pierre Perreault, Harold Rhéaume, Lucie Boissinot, Pierre-Paul Savoie, and Emmanuel Jouthe, and Katie Ward, among others. He is a member of Peter James’s Psykotik Happening Cabaret and has collaborated in four creations of the performance company, Mobile Home (Duras Show). Patrick’s choreographic works have been presented at Tangente, at FIND and Printemps de la danse, at the National Circus School in Montreal, by Échine Dô, and by the Bravo! arts channel.

Nigel Charnock (1960-2012), celebrated throughout Europe as a performer and choreographer, was referred to as “the unreconstructed bad boy of physical theatre”. After successful collaborations with Lloyd Newson and DV8, Nigel Charnock formed his own company in 1995 with the aim of creating a variety of multidisciplinary projects. All his work generated love-sex-death narratives that aggressively confront conformity and explode with morbid humour.

He created and performed a string of unique one-man shows: Human Being, Hell Bent, Original Sin, Resurrection, Frank, and One Dixon Road, that combined Nigel’s extraordinary stage presence with his versatile talents as dancer, singer, actor and comic. In 1998, he created Fever, an improvisation for him and jazz saxophonist Michael Reissler. From 2003 to 2005, he was artistic director of the Helsinki Dance Company. His most recent production, Stupid Men, is an improvised quartet for male performers.

In June 2007 at the Venice Biennale, Nigel presented Stupid Men, a totally improvised male quartet. He succumbed to an aggressive cancer on August 1, 2012, in London.